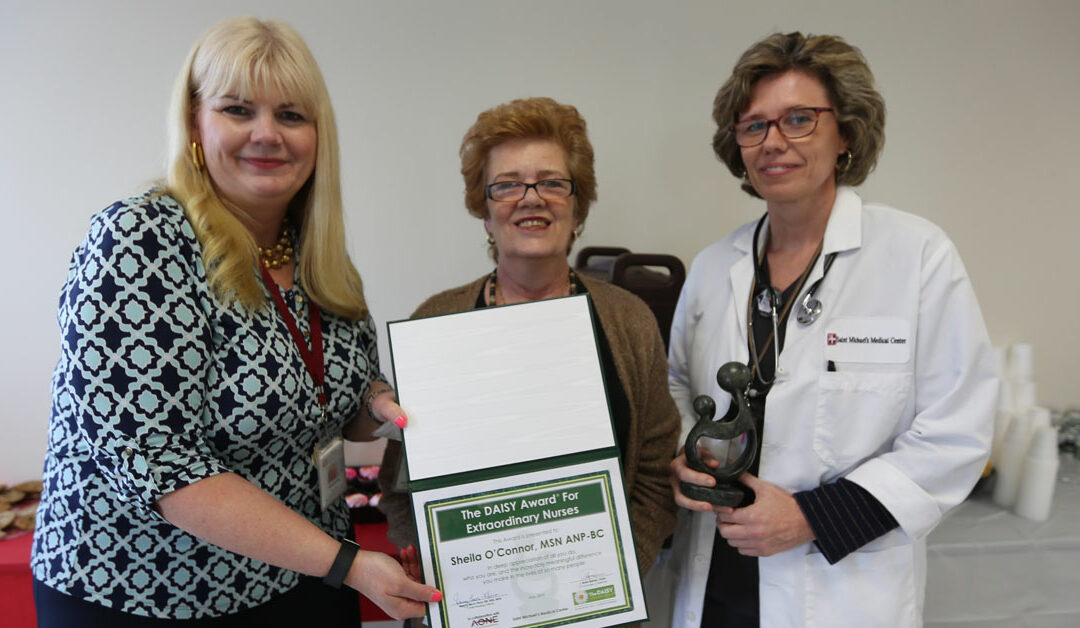 A veteran nurse practitioner at Saint Michael’s Medical Center was honored with the DAISY Foundation’s Daisy Award, which honors the super-human work nurses do for patients and families every day.

Sheila O’Connor of East Hannover has worked as a nurse practitioner at Saint Michael’s for the last nine years in the cath lab and the stress lab, was recognized for the way she handles the unpredictability of working as a cardiac clinician.

“The role of a nurse practitioner in the cardiac service line is fast paced and unpredictable,” said Nancy Bisco-Flora, the chief nursing officer at Saint Michael’s. “Dealing with varying physician preferences, fluctuating volume and ever-changing acuity can be extremely stressful. Sheila handles all of this with a smile. She individualizes her approach to patients to ensure that they feel safe, comfortable and receive exemplary clinical care.”

O’Connor, who has been a nurse for 17 years, also works at Saint Michael’s sister hospital, Saint Clare’s in Dover, both of which are owned by Prime Healthcare. O’Connor earned her nurse practitioner’s degree from University of Medicine and Dentistry (UMDNJ) in Newark, which has since been renamed Rutgers Biomedical and Health Sciences.

“I love coming to work every day,” O’Connor said. “The staff really makes the hospital fantastic. I just think the world of them. My job is only possible because they are all so wonderful.”

The DAISY (an acronym for Diseases Attacking the Immune System) Foundation was started in Glen Allen, Calif., by family members of J. Patrick Barnes, who died from complications of Idiopathic Thrombocytopenic Purpura (ITP), a little-known but not uncommon auto-immune disease.

As a way of thanking Barnes’s nurses, his family established the award program.

The DAISY Award ceremony, held before colleagues, honored O’Connor with the “Extraordinary Nurse” certificate, which reads: “In deep appreciation of all you do, who you are, and the incredibly meaningful difference you make in the lives of so many people.”

To read more about the DAISY award, please visit www.DAISYfoundation.org.