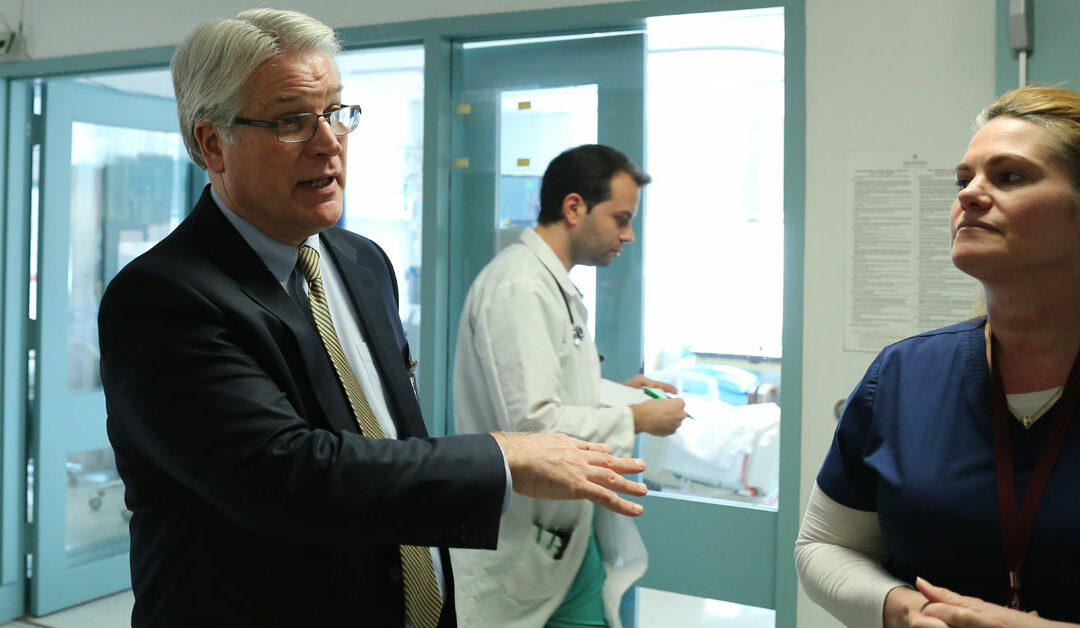 ”There’s something about Saint Michael’s… that when you step in, you forget you’re in (Newark).”

Saint Michael’s Medical Center CEO Robert Iannaccone said his goal is to keep it that way.

The hospital’s for-profit parent, California-based Prime Healthcare Services, is nearing half of its capital improvement commitment after less than a year of taking over operations.

Prime was granted ownership of SMMC last May after a year-long bankruptcy court battle and committed to investing $50 million in the first five years of ownership in capital improvements.

It has already invested $21 million, according to Iannaccone.

And turned a profit in the first year — the first time in a while for the formerly bankrupt facility — despite all the “extraordinary expenses we had in 2016,” he said.

The investments range from new systems for electronic health care records — the hospital is moving to the popular EPIC system on March 1 — new monitoring devices and the latest cancer treatment equipment.

The hospital is also upgrading its supply distribution and tracking system that will create savings and efficiencies in the supply chain.

This, Iannaccone said, is one of the strengths of Prime. “Matrices” and the ability to group purchase for its more than 40 facilities nationwide.

But the facility wasn’t too far behind in technology, and Iannaccone said he inherited a facility that was in “pretty good condition” as defined in the Navigant report, including a recently renovated emergency department and an existing electronic health record system.

Operating rooms are now being revamped and intensive care rooms are getting a facelift. The hospital is doubling down on key areas such as cardiac care, senior care and cancer care, as well as focusing on quicker care in what is expected to be a busier emergency department.

A bariatric center has halted operations while a new, upgraded center is built, and patients have been transitioned to other facilities in the region, Iannaccone said.

But the court battle and public reports about it took a toll on the patient volume at the hospital, as well as communication with physicians.

Iannaccone said that is all being turned around now, with community outreach and rekindling physician relationships — both keys to increasing patient volume and helping the hospital compete in the provider-heavy Newark.

Dr. Claudia Komer, chief medical officer, recalls what life was like under the former owner and it not having enough money to participate in reports like Leapfrog and others.

But the hospital has finally stabilized and she feels hopeful for the future.

Admissions, which were waning are slowly building back, and graduate medical students can put the teaching hospital back on their list, Komer said.

“There’s a very refreshing attitude in the hospital, and people are very responsive — you can see it, whether it be metrics of any kind, patient satisfaction scores … it’s really an extraordinary change,” Komer said. “Volumes were very low during the transition, but considering, they bounced back quickly.”

Right now, the hospital is only in-network with the state’s largest health insurer, Horizon Blue Cross Blue Shield of New Jersey, but is working on contracts with other insurers, Iannaccone said.

“We are accomplishing what would typically be a five-year capital plan in less than eight months,” Komer said.

“I think we’re in a great — we’re stabilized. Mr. Iannaccone and the finance people kind of settled us, so now we can finally begin to grow. The internists in the area, the community sees it.”

THE UPGRADES
Prime Healthcare originally promised to invest $25 million in the hospital over its first five years of ownership as a condition of state approval, then doubled its commitment to $50 million as part of the purchase agreement.