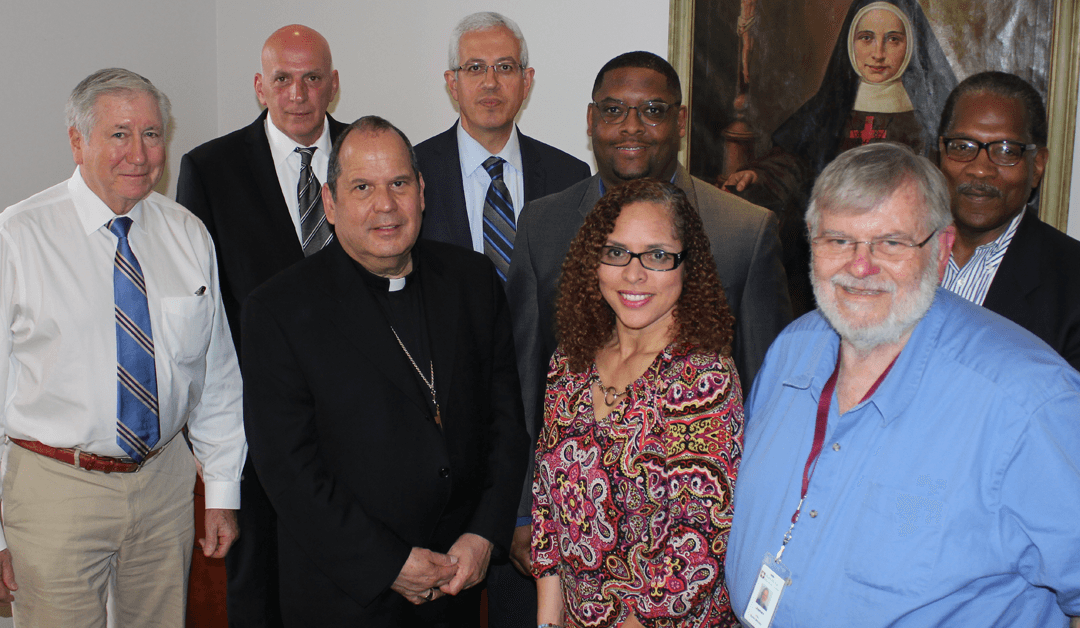 Saint Michael’s Medical Center appointed an eight-member board of directors who represent a broad swath of the Greater Newark community to oversee the direction of hospital.

The board elected the Rev. Ronald Slaughter, the pastor of Saint James AME, to serve as chair. Harry McNeill, president and CEO of Kearny EMS, was elected vice chair.

Saint Michael’s board of directors had to be reconstituted after the sale of the hospital in May 2016 from Trinity Health to Prime Healthcare Services. 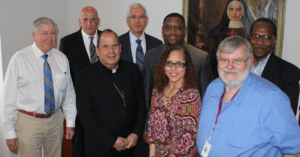 “With three exceptions, the board of directors was built from scratch and each member was carefully selected to ensure all the communities we serve are well represented,” said Saint Michael’s CEO Robert Iannaccone. “The board will ensure that the hospital’s mission to provide compassionate, high-quality care is upheld in a financially sound manner that guarantees our long-term prospects.”

The other new board members are: Harrison Mayor James Fife; the Most Rev. Manuel Cruz, auxiliary bishop of the Archdiocese of Newark; and Marisol Ramirez, an accounts payable supervisor at PSEG in Newark.

Also appointed to the board were Dr. William DiGiacomo, Cecil Cates and Rev. Msgr. Ronald J. Rozniak, the Episcopal Vicar for Health and Social Concerns of the Archdiocese of Newark. All three previously served on the Saint Michael’s board under the ownership of Trinity. Dr. Adel Armanious, president of the medical staff, is a non-voting member of the board.

The Rev. Slaughter headed a coalition of clergy that fought to save the hospital when the sale to Prime stalled for nearly three years. The coalition rallied the community to put pressure on the state to approve the sale.

“I’m honored and humbled by the confidence the board has placed in me by electing me to serve as chairman,” Slaughter said. “Saint Michael’s is a first-class hospital because of the wonderful administration, physicians, nurses, and staff who really care about the patients we serve and the community we are a part of. I look forward to providing the type of leadership that will make Saint Michael’s the premier medical center in the northeast corridor.”

Saint James AME is the largest African-American Episcopal church in New Jersey with some 1,700 worshippers attending services every weekend. Under Slaughter’s leadership, the church is deeply involved in social justice issues, such as fair wages, access to healthcare and racism in higher education.

McNeill, who served on a board that was involved in the design of Saint Michael’s new emergency department, said he was honored to be elected vice chair.

“I will as we all will do our best to help Saint Michael’s become the best medical center in the state,” McNeill said.

Dr. DiGiacomo, who has been affiliated with Saint Michael’s since his medical internship in 1975, is an internist in private practice with offices in Newark and Union.

Cates is the owner of and founder of CMIT Solutions of Northern Union County, an information technology managed services and consulting company.

“I’m honored and excited to be part of the new board and the new Saint Michael’s,” Cates said. “Having served on the previous board for 4 years, I look forward to Saint Michael’s continued role of providing exceptional medical care and employment opportunities in the Greater Newark community.”

Mayor Fife’s relationship with Saint Michael’s goes back to his first visit to the hospital in 1949, when he had his tonsils removed. He was also patient in 2014, when he had a heart valve replacement.

Ramirez, who was born at Saint Michael’s, has been actively involved in the community, serving as treasurer of the Puerto Rican Day Parade of Newark, N.J.

“It is an honor and privilege to have been selected to serve on the Local Governing Board of Saint Michael’s,” Ramirez said. “As a Newark native, it is important to stay grounded in my roots and give back to the institution and city that nurtured me since my first breath in life. I look forward to working with a great team of colleagues and being a part of the success and growth of Saint Michael’s.”

Bishop Manual Cruz was ordained a priest of the Archdiocese in 1980. In addition to several years of parish ministry, he has served as both a chaplain at Saint Michael’s Medical Center and as vice president of Mission and Ministry for Catholic Health and Human Services. He currently serves as director of hospital ministry for the Archdiocese, Episcopal vicar for Hispanic Affairs, regional bishop of Union County, and as rector of the Cathedral Basilica of the Sacred Heart in Newark.

Msgr. Rozniak, who was ordained as a priest of the Archdiocese in 1971, has been pastor of Our Lady of Mt. Carmel Parish, Ridgewood, since 1997. He also is a former vicar general and moderator of the Curia of the Archdiocese and currently serves on the Archdiocese’s College of Consultors, Presbyteral Council and Finance Council. He also has served for many years on the Board of Catholic Charities of the Archdiocese of Newark.