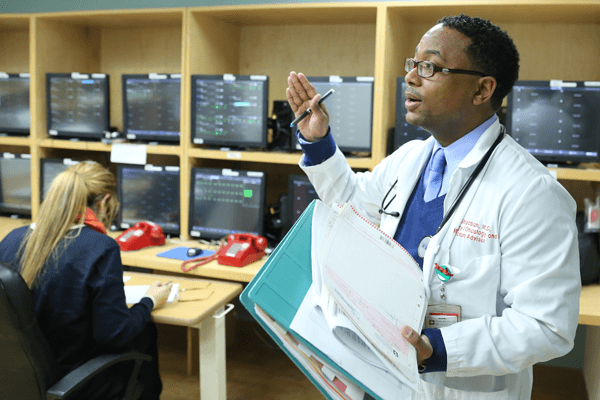 Saint Michael’s Medical Center is urging residents of Greater Newark who are over the age of 50 to talk to their primary care physicians about a colorectal cancer screening.

“A recent student found that the rate at which people are diagnosed with colon cancer in the country has dropped 30 percent in the last 10 years for those aged 50 years and older, an age group in which colonoscopy use, one of several tests available, has almost tripled,” DePasquale said.

Saint Michael’s recently signed on to the “80% by 2018,” a national campaign launched this month by the National Colorectal Screening Roundtable (NCCRT), in recognition of Colorectal Cancer Awareness Month.

The NCCRT was co-founded by the American Cancer Society and the Centers for Disease Control and Prevention (CDC) to reduce colon cancer incidence and death rates.

By joining the “80% by 2018” campaign, Saint Michael’s is committed to ensuring at least 80 percent of all residents in the Greater Newark area who are over 50 are screened for colorectal cancer.

Saint Michael’s is also committed to removing barriers that include cost, transportation, and resistance to what is viewed as an unpleasant procedure.

Saint Michael’s is the only hospitals in the Greater Newark area to operate “In the Pink,” which provides free or low-cost education, outreach, screening, and treatment to women and men who qualify.

The program’s primary goal is to increase the proportion of age-appropriate men and women who are screened for breast, cervical, colorectal and prostate cancer among Essex County’s underserved population.

“A lack of health insurance or poverty should not be a barrier to cancer screening,” said Aretha Hill-Forte, who oversees the In the Pink program.

Colorectal cancer is the third most commonly diagnosed cancer in both men and women. In 2017, there will be an estimated 95,520 new cases of colon cancer and 39,910 cases of rectal cancer diagnosed in the U.S.

While colorectal cancer incidence rates are on the decline, there is more that can be done. In 2010, the most recent year for which numbers are available, only 59 percent of people ages 50 or older reported being up to date with colon cancer screening.

Those less likely to get tested include Hispanics, people with limited English language skills, American Indian or Alaska natives, and people with lower education and income.

“By committing to 80% by 2018, Saint Michael’s is dedicated to enhancing our already extensive outreach efforts to empower members of our Newark community to collaborate with us to eliminate the disparities and barriers to screening services,” said Dr. Hamid Shaaban, a hematologist-oncologist and director of the hospital’s Cancer Center and chief medical officer at Saint Michael’s. “Colon cancer is a largely preventable disease and we can save more lives with timely screening.”