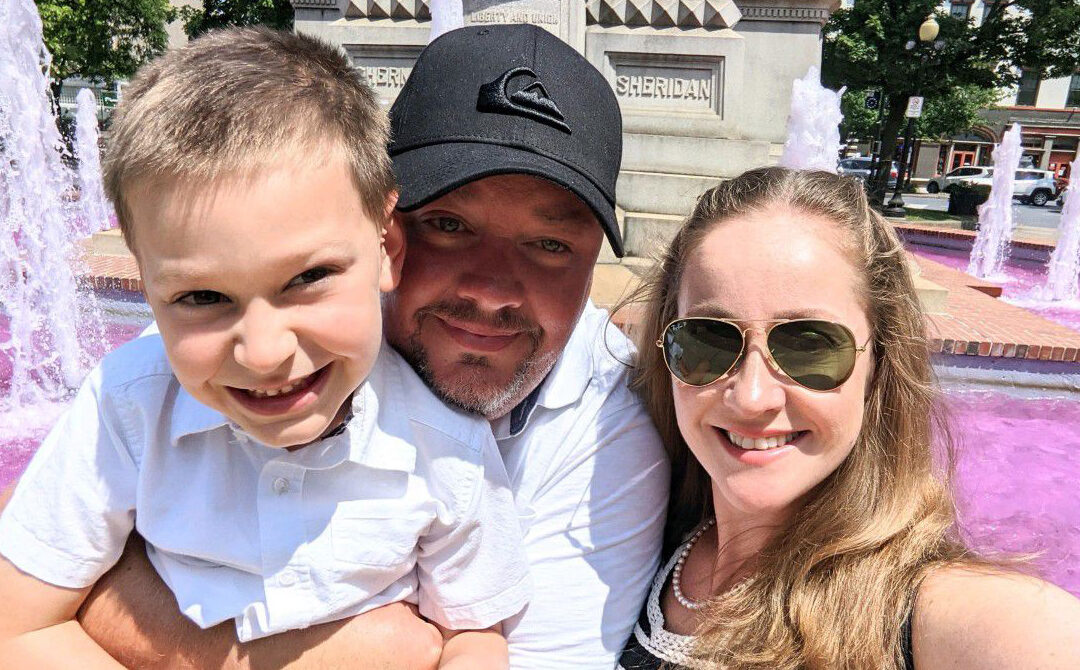 Phil Schneider with his son, Joey, and wife, Anna.

Read this article as it originally appeared Oct. 14, 2021 on nj.com (subscription required).

Joey, his 6-year-old son, came down with a mild case of COVID-19 on a recent weekend after catching the coronavirus from a classmate. Yet Schneider and his wife, Anna, initially had no symptoms.

But by Oct. 4, the Ringwood native felt like he had “been hit by a train.”

The 43-year-old salesman was lethargic, mildly congested and had deep muscle pain all over his body. The worst symptom was a debilitating headache unlike any he had experienced.

Schneider has underlying health conditions — obesity and asthma — that put him at high risk of serious complications. His sister, a nurse at Saint Michael’s Medical Center in Newark, urged him to receive a monoclonal antibody treatment.

After a screening at the hospital, Schneider was hooked to an IV on Oct. 6 and given the Regeneron Pharmaceuticals therapy.

“The next day, I was on my couch, and it was like a switch — my body felt fine,” said Schneider, whose family lived in Boonton before moving to Pennsylvania. “Then I felt this energy. I felt great. I couldn’t believe how fast it worked.”

The cocktail of monoclonal antibodies is one of two leading antibody drugs — the other is offered by Eli Lilly & Co. — for people who have mild to moderate COVID-19 and those who are at high risk of developing a serious case.

The antibody therapies and the antiviral drug remdesivir are among the few treatments available for coronavirus patients, an arsenal that until recently was deemed inadequate by doctors. But another option looms on the near horizon, one with even more promise.

On Monday, Merck announced that it applied for emergency use authorization with the Food and Drug Administration for a pill to treat COVID-19. Molnupiravir would be the first treatment that works similarly to monoclonal antibodies — reducing the severity of infection — available in pill form.

All other FDA-backed therapies require an IV or injection. A decision on the drug from the Kenilworth-based Merck could come in a matter of weeks.

Health experts in interview after interview with NJ Advance Media said the pill could be “a game-changer” in helping people infected with mild to moderate COVID-19 avoid hospitalization and death.

The availability of a pill, they say, would vastly expand access to COVID-19 treatment, which now is largely limited to facilities with infusion sites. Monoclonal antibody treatments also require two hours — an hour for the drug to be administered and another hour for observation.

“Monoclonal antibodies are very helpful, and they’ve truly been lifesavers … but they are not easy to give,” said Dr. Ed Lifshitz, the director of the state Department of Health’s communicable disease service. “They’re intravenous. Your doctor’s office won’t have it. Most pharmacies won’t have it.

“Most nursing homes, assisted living facilities … don’t have the equipment and expertise to give infusions. The theoretical big advantage of the Merck pill is that pills are whole lot easier to get.”

Despite evidence proving monoclonal antibodies reduce the likelihood of hospitalization and death, hospital officials say many people — including some primary care physicians — seem unclear about its availability. There is a tight window in which they must act. The antibody treatment, which has been given to tens of thousands of patients in New Jersey, must be administered within 10 days of the onset of symptoms.

“People need to be aware” that monoclonal antibodies are an option for those with less severe COVID-19 cases and those with underlying conditions who have been exposed, said Dr. Hamid Shaaban, the chief medical officer at Saint Michael’s Medical Center. “It’s shocking that we have all these drugs but not [all] doctors are aware.”

“There needs to be more education about how this medication is administered,” he added. “Primary physicians are aware of it, but [sometimes] not of the logistics of how a patient gets it, which facility does it and how to arrange it for their patients.”

The antibody treatment also is given as a prophylactic drug to people with comorbidities — or those older than 65 — who have been exposed to the virus.

“It’s all about a window,” said Shaaban, referring to the 10-day limit. “Once the antibodies start progressing, the horse is out of the barn. Early intervention strategies have been the only thing to impact hospitalization and deaths.”

Dr. Christopher Freer, the senior vice president for emergency and hospitalist medicine at RWJBarnabas Health, said more than 96% of the 10,500-plus patients who have received the antibodies treatment in the network’s 11 hospitals have not needed f.

“If you have a cough, runny nose, we want to catch you early on,” Freer said. “If you have oxygenation [needs] and need hospitalization, you don’t qualify.”

But the Merck pill could reduce or even eliminate the logistics involved in obtaining current COVID-19 treatments.

Like many health experts, Lifshitz stressed that he would like to see the hard data behind the pill, which a patient would take twice a day for five days soon after symptoms appear.

Several pharmaceutical companies, including Pfizer and Roche, are studying similar drugs. AstraZeneca is also seeking FDA authorization for a long-acting antibody drug designed for immunocompromised people who do not respond well to vaccination.

To be eligible, a person must test positive for COVID-19, be 65 or older or have conditions such as diabetes, obesity or lung disease.

Monoclonal antibodies were largely on the margins of public awareness until last fall, when then-President Donald Trump contracted the coronavirus and received an infusion of Regeneron’s monoclonal antibodies before the FDA authorized emergency use of it. Trump credited it with helping him recover. Weeks later, then-Housing and Urban Development Secretary Ben Carson, who tested positive for COVID-19, said the antibodies drug had “saved my life.” Former Gov. Chris Christie also received the treatment last year when he contracted the coronavirus.

Monoclonal antibodies are widely accessible in New Jersey, mainly through hospitals, many of which get their supplies from the state government. Some states with low vaccination rates, such as Florida, have set up monoclonal antibody treatment sites.

Hospital officials say they prefer to administer the treatment to people who are referred by a physician. But because that might not always be feasible, they add that anyone who develops COVID-19 symptoms and meets the eligibility requirements may go to an emergency room, get screened and set up for an infusion.

Holy Name Medical Center in Teaneck, one of the first U.S. hospitals to take part in monoclonal antibody clinical trials, has a 24-hour hotline that patients may call to see if they’re eligible, said Dr. Suraj Saggar, the hospital’s chief of infectious disease.

“We usually have physicians refer the patient,” Saggar said. “Ideally, you should talk to a primary care physician.”

But since time is of the essence for the drugs to be effective, turning directly to a hospital might be best if a physician’s referral is not immediately possible.

“We have a nurse practitioner who screens patients,” Saggar said. “The hotline is answered 24/7. Patients are screened and then scheduled. We’re trying to get the word out.”

COVID-19 patients should be aware of a few questions to ask as soon as they receive a positive COVID test.

“It’s important to talk to your primary care physician. You may qualify under a condition you’re not aware of,” said Dr. Rani Sebti, infectious disease specialist at Hackensack University Medical Center. “Ask, ‘Do I qualify for monoclonal antibodies, and how soon can I get it?’”

If going through a physician is not possible, Sebti suggests calling Hackensack University Medical Center and asking for a monoclonal antibody treatment screening.

“He never got back to me,” Schneider said. “My sister said, ‘You better not wait.’”

Health professionals say the country has made great strides in treating COVID-19 since last year, when hospitals nationwide were overrun by infected patients.

But they stress that prevention is always more effective than treatment.

“We have never seen such dramatic efficacy in medicine in respiratory infections as we have with the Pfizer and Moderna vaccines,” Sebti said.

Added Shaaban: “We have these remedies now, but vaccination trumps all of them. The goal is to prevent. Prevention is better than intervention. Especially now that there’s the vaccine, this is now a potentially reversible illness. No one should be dying from COVID.”

Our journalism needs your support. Please subscribe today to NJ.com.