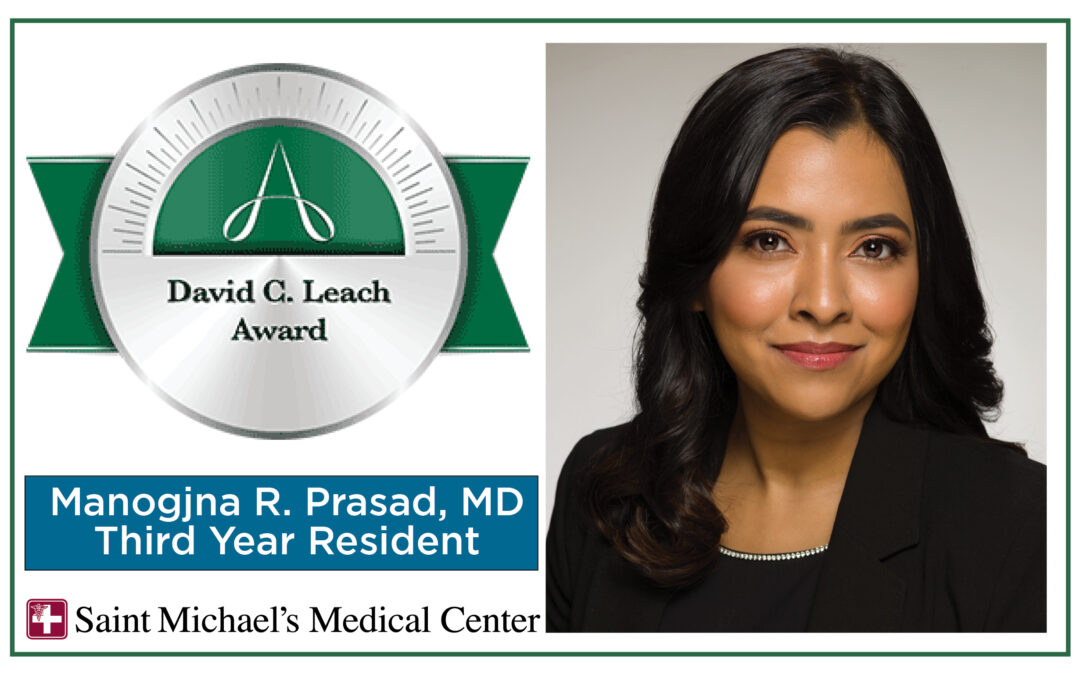 Manogjna Ruth Prasad, MD, an internal medicine resident at Saint Michael’s Medical Center, has been recognized with a national award for an educational program she designed to thwart bias in the delivery of health care.

Dr. Prasad, a third-year resident at Saint Michael’s received the 2023 David Leach Award from the Accreditation Council for Graduate Medical Education (ACGME). She will be recognized along with the other winners at the 2023 ACGME Annual Educational Conference in Nashville, Tenn., at the end of February.

“We are proud to have such accomplished individuals and programs supporting the medical education continuum while navigating a great deal of uncertainty,” Dr. Nasca said.

Dr. Prasad was nominated by Ted DaCosta, MD, the director of the medical education program at Saint Michael’s, who said her initiative led to a significant reduction of bias among Saint Michael’s residents.

“A post-curriculum survey showed increased awareness, trust, and willingness to speak openly about difficult and sensitive topics,” Dr. Dacosta said. “It also encouraged introspection in residents. Some residents also said the curriculum helped them get back to the real reason why they chose to become medical doctors.”

She said her project was designed to overcome implicit bias and improve health outcomes by educating residents about the social determinants of health faced by the population of Newark, and the role of American history in contributing to the health disparities in Black people.

“Stereotyping, labelling, biases, and prejudices that people develop about others of a different race, ethnicity, gender, color, or social class are part of a universal phenomenon of epidemic proportions,” said Dr. Prasad, who is the administrative chief resident of diversity, equity and inclusion.

“These kinds of attitudes and unsubstantiated beliefs lead to generalization and to disparities and inequalities in societies,” Dr. Prasad said. “Ironically, most times, even individuals who are educated, culturally sensitive, and egalitarian unconsciously display the behaviors that stem from stereotyping and prejudices.”

Dr. Prasad, who was born and raised in India, came to Newark to continue her medical education. In June of 2021, when she was still a first year resident at Saint Michael’s, Dr. Prasad spearheaded a fundraiser to raise awareness about pandemic in India and raise funds for Doctors Without Borders.

Dr. Prasad said she went to medical school not only to help people physically, but to help the wider community as well. She said she’s always loved the social aspect of medicine.

She said being an immigrant and person of color has exposed her to both implicit and explicit bias. “When I started doing my residency here at Saint Michael’s, I realized that we needed to start addressing racial disparities, health equity and the role of implicit bias in healthcare outcomes,” Dr. Prasad said. “We can’t deliver exceptional care if we don’t address these issues.”