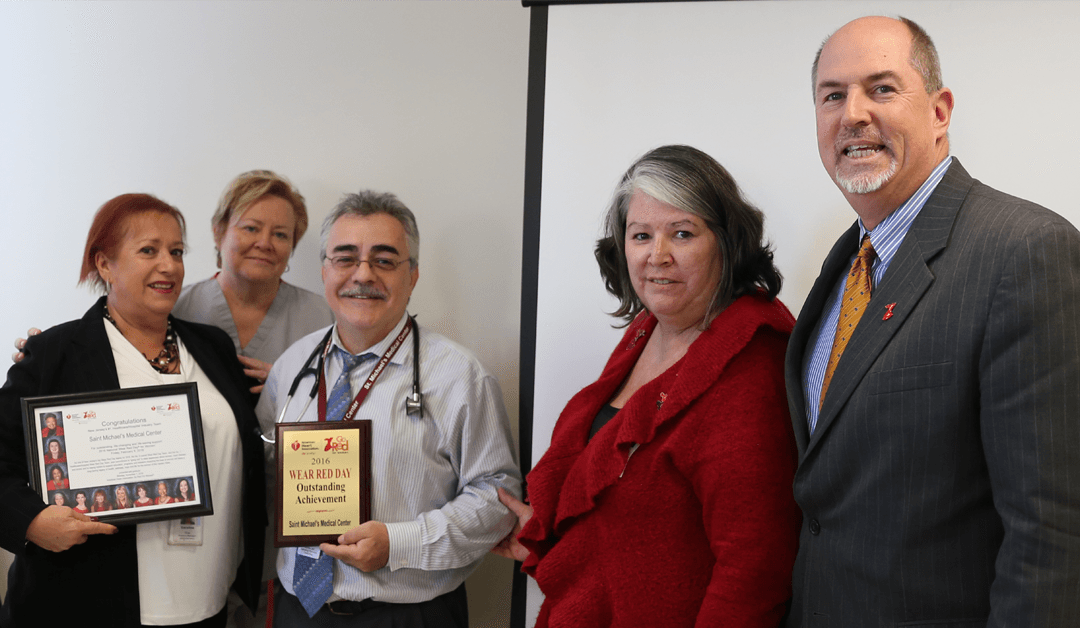 Peter C. Cary, (far right) senior director for corporate health and mission engagement for the American Heart Association and Patty Lang, a stroke victim and volunteer for the AHA, present an award to Caroline Pires, assistant to the CEO, Janice Learn, manager of the catheterization laboratory and Dr. Joaquim Correia, division chief of cardiology.

The award was presented Nov. 7 by Peter C. Cary, the senior director for corporate health and mission engagement for the American Heart Association, and Patty Lang, a two-time stroke victim survivor.

“We are there to thank you for your extraordinary performance,” Cary said. “Because of efforts like yours, we have been able to fund more than $50 million since 2004 focused on women.”

Wear Red Day, part of the Heart Association’s Go Red for Women campaign, was launched in 2004 to help start a conversation in the United states about women, heart disease and stroke. More than 25 countries participated in Wear Red Day in 2016.

“What you are doing when you volunteer for Go Red for Women is saving us,” said

Lang, a mother of four, who was only 42 years old when she suffered her first stroke while driving down the New Jersey Turnpike in December 2008. A second stroke followed two years later.

“Who would have thought at 42? Nobody told me at 42 that I was at risk of stroke,” she said. “I didn’t meet any of the criteria that you would normally think and, at 42, quite honestly, there were other things I was worried about.”

As a volunteer for the American Heart Association, Lang said she makes it her mission to ensure other women are informed about the risks.

Robert Iannaccone, the CEO of Saint Michael’s, said he is proud of the employees and medical staff at the hospital for embracing national Wear Red day.

“This recognition is a testament to the commitment to heart health of our employees and our medical staff,” Iannaccone said. “This is just one example of what truly makes Saint Michael’s a great hospital.”

Saint Michael’s, a 357-bed hospital in the business and university district of Newark, operates the Heart and Vascular Institute, one of the leading cardiovascular centers in the region. The hospital has been rated high performing by U.S. News and World Report for the treatment of heart failure.