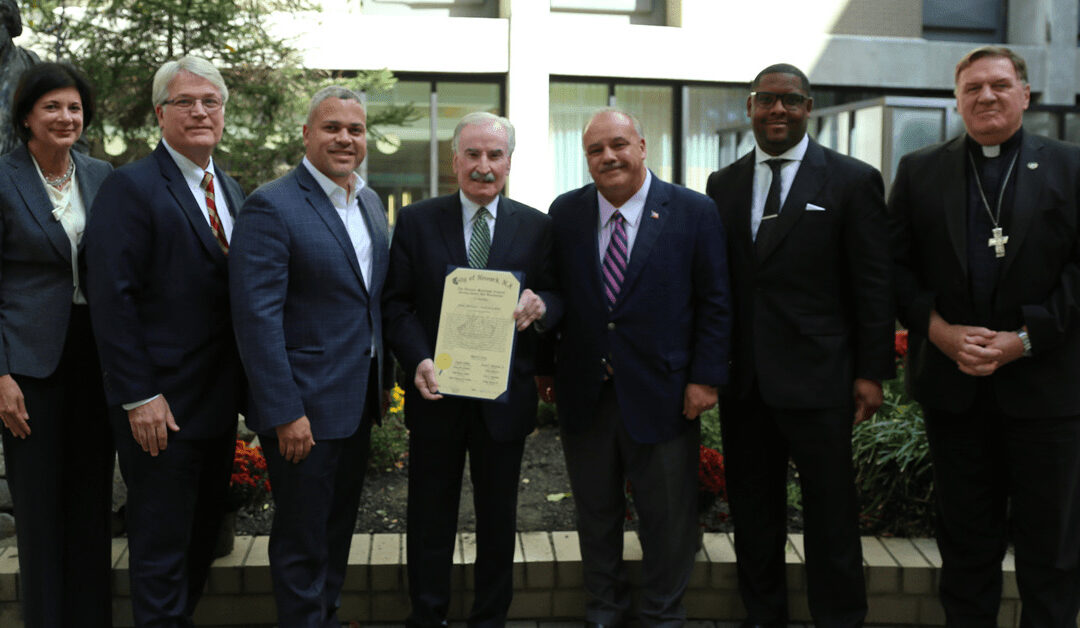 Saint Michael’s Medical Center marked its 150th Anniversary today with a celebration that included a visit from the highest ranking Catholic prelate in New Jersey as well as a host of elected officials and civic leaders from throughout the community.

Cardinal Joseph Tobin of the Archdiocese of Newark blessed the Newark hospital on the 150th anniversary of its founding by the Franciscan Sisters of the Poor, who came from Cincinnati, Ohio, to open a hospital for the city’s growing, poor immigrant population.

The anniversary was celebrated on the Feast of Saint Michael the Archangel, which is marked every year by the hospital. Saint Michael’s continues to observe Catholic traditions and it is committed to the Ethical and Religious Directives that are an integral part of every Catholic hospital.

“I am thrilled that the hospital not only has survived for 150 years, but is a thriving center of healing that provides the highest quality healthcare to those who have made this region their home,” Cardinal Tobin said. “It is entirely appropriate that we celebrate this joyous occasion on the Feast of Saint Michael.”

With the closure of so many hospitals in the region, Saint Michael has evolved to serve not only Newark, but Kearny, Harrison and East Newark in Hudson County, North Arlington in Bergen County and Belleville, Bloomfield and the Oranges in Essex County.

Saint Michael’s was purchased in May 2016 by Prime Healthcare, a California-based healthcare founded in 2001 by Dr. Prim Reddy that operates nearly four dozen hospitals across the United States. Prime Healthcare also owns Saint Mary’s in Passaic and Saint Clare’s Healthcare in Morris County.

“Our goal when we purchased Saint Michael’s was to operate a world-class hospital for residents of the Greater Newark region,” said Luis Leon, president for operations for Prime Healthcare Division II. “Saint Michael’s has a long and proud history and it has a strong and secure future.”

In the last year, Saint Michael’s has invested more than $21 million in upgrades, including the installation of the EPIC system for electronic records, new monitoring devices and the latest cancer treatment equipment to the Cancer Center. Less than a decade ago, the hospital also added a new wing with a state-of-the art emergency room. Last week, the emergency room opened a new Fast Track unit that will reduce the hospital’s shortest-in-the-region wait times even further.

“With the commitment of Dr. Prim Reddy and the resources of Prime Healthcare, we’ve been able to make significant investments in Saint Michael’s,” Iannaccone said. “Saint Michael’s is one of the most modern healthcare facilities in the region.”

Throughout its history, Saint Michael’s has been a pioneer in the medical field. The hospital was the first in New Jersey to perform open-heart surgery, and the first to develop a cardiac catheterization program. It was also the first hospital to open an HIV testing center in New Jersey and has tested and diagnosed thousands of cases of the disease since it was first discovered in the 1980s. Saint Michael’s also opened one of the first women’s breast center’s in the state, the Connie Dwyer Breast Center.

“Saint Michael’s has played an extraordinary role in the delivery of modern healthcare in this city and region,” said Dr. Claudia Komer, the chief medical officer of the hospital. “The employees and medical staff who work here embrace our role in the community and aspire to deliver high quality medical care to all those who come through our doors.”

Central Ward Councilwoman Gayle Chaneyfield Jenkins said Saint Michael’s is one of Newark’s thriving institutions that not only provides healthcare, but jobs to local residents.

“Saint Michael’s is an economic engine in this city,” said Chaneyfield-Jenkins, who lead the charge on the City Council to save the hospital.

Chaneyfield Jenkins also noted that the hospital sits amid a growing residential community, with thousands of new housing units built or in the planning stages.

“As Newark’s Central Ward and business center continues to grow, all of these new residents will be looking for high quality health care,” Chaneyfield Jenkins said. “Fortunately, they will not have to go far because Saint Michael’s is right in their backyard.”

North Ward Councilman Anibal Ramos Jr. said since the closing of Columbus Hospital in the city’s North Ward, Saint Michael’s has stepped up to serve the residents of his predominantly Latino ward.

Many of those on Saint Michael’s staff are bilingual in Spanish or Portuguese and important documents and signs throughout the hospital are translated into both languages.

“For many of the residents of the North Ward, Saint Michael’s is not just convenient, but it is also their hospital of first choice,” Ramos said. “I congratulate the hospital on its first 150 years and I look forward to their continuing service to our community.”

The hospital also provides healthcare for residents of the primarily Portuguese and Brazilian Ironbound neighborhood in the city’s East Ward, which lost its only hospital when St. James closed. Many of the employees and medical staff of Saint Michael’s worked at either Columbus or St. James.

“The closing Saint Michael’s Medical Center was never an option for me,” said East Ward Councilman Augusto Amador. “I represent a community that has serious needs in the area of health services since Saint James Hospital closed its doors a few years ago and Saint Michael’s is fulfilling some of those needs. Saint Michael’s is coming back and I commend those who work everyday to make the hospital a strong and shining example of the kind of health institution Newark should have.”

Saint Michael’s also serves the surrounding communities, like Harrison, which is also seeing an influx of new residents.

Harrison Mayor James Fife said Saint Michael’s, despite being across the Passaic River from Harrison, is actually the closest hospital to the Hudson County town.

“In an emergency situation, having Saint Michael’s so close is a godsend,” said Fife, who serves on the board of Saint Michael’s. “As our community continues to grow, Saint Michael’s will most certainly play an important role in our future.”

“Our medical education program has produced more than 1,000 graduates, many of whom remain in our community and many of whom have made extraordinary contributions in their fields of expertise,” Komer said. “This demonstrates the commitment of our medical staff and the culture of service at this hospital.”