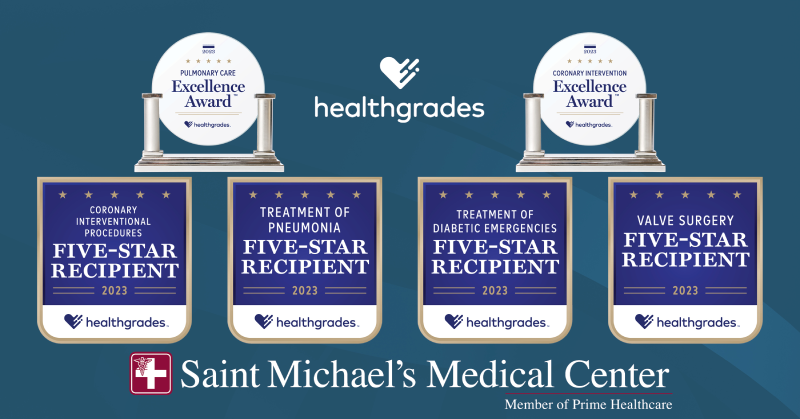 Saint Michael’s Medical Center, a member of Prime Healthcare, today announced that it is nationally recognized in cardiac and pulmonary care and received four Five-Star ratings, according to new research released by Healthgrades, the leading marketplace connecting doctors and patients.

Prime Healthcare is one of the nation’s leading health systems with 45 hospitals and more than 300 outpatient locations in 14 states. Prime’s hospitals received more than 250 accolades from Healthgrades for the 2023 award season.

“We are proud to be nationally recognized by Healthgrades,” said Saint Michael’s CEO Alan Sickles, MD. “We are committed to providing the highest quality care to the community we serve. In the last few years, we have made tremendous investments in cardiac and pulmonary care, allowing us to offer the latest technology to our patients close to home.”

Saint Michael’s was previously awarded Healthgrade’s Patient Safety Excellence Award and has received an A from the Leapfrog Group in its semi-annual report card on patient safety. Saint Michael’s was also the only hospital in New Jersey to be named to the Fortune/Merative Top 100 Top Hospitals (formerly IBM Watson.)

Healthgrades evaluated patient mortality and complication rates for 31 of the most common conditions and procedures at nearly 4,500 hospitals across the country to identify the top-performing hospitals for specialty care.

Consumers can visit Healthgrades.com to learn more about how Healthgrades measures hospital quality and access a patient-friendly overview of the complete methodology here.