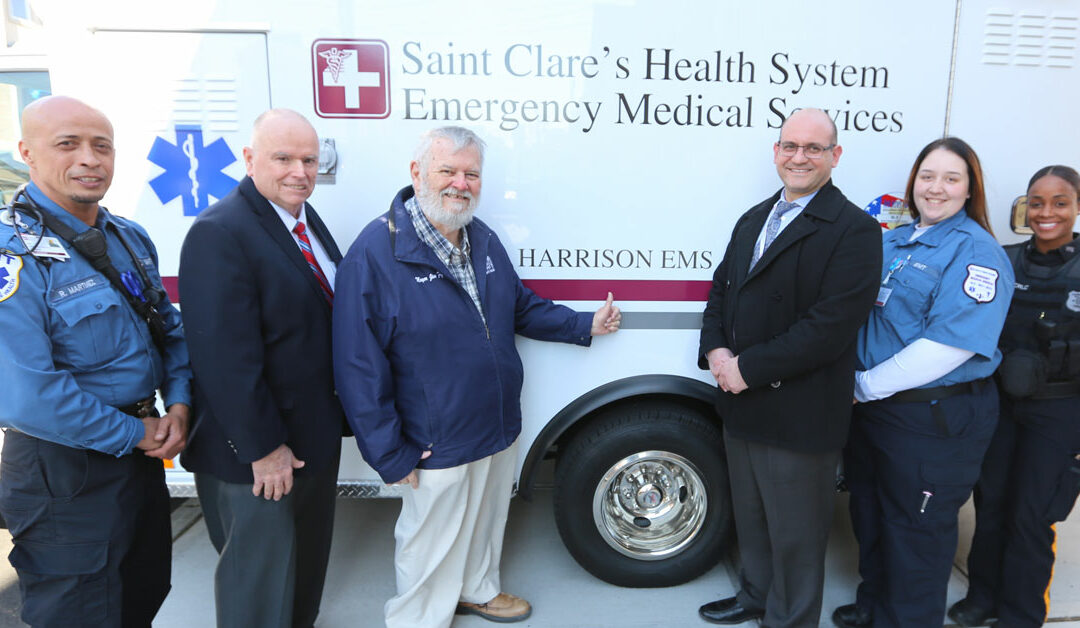 Residents of Harrison and East Newark who call 911 for emergency medical care can expect faster response times under a new contract awarded for the town’s ambulance services.

“It’s a big win for the residents of Harrison,” Harrison Mayor James Fife said. “The response times have been reduced. We have received no complaints since Prime Saint Clare’s took over the contract. It’s been a great experience so far and we don’t expect that to change.”

Vito Cicchetti, the director of Medical Transport/Emergency Medical Services for Saint Clare’s Health, said one of the major differences under the new contract is the addition of a second “power” ambulance that will be staffed from 11 a.m. to 11 p.m. during the busiest hours.

“We’re offering the second ambulance in the event that the first ambulance gets called on a mutual aid job in another community, there’s always one ambulance available in Harrison during the busiest hours,” Cicchetti said.

During the first two weeks, Cicchetti said the ambulance crew handled an average of 30 calls per week. The ambulances are staffed by two state-certified emergency medical technicians (EMTs).

Prime Saint Clare’s purchased two new state-of-the-art ambulances valued at $110,000 each at no cost to Harrison taxpayers. They are stationed at the Cleveland Avenue firehouse in Harrison. MONOC took its ambulance when it lost the contract.

Harrison Fire Chief Harold Stahl said the additional ambulance has made a tremendous difference for the Harrison Fire Department. Under the old contract with MONAC, if a second ambulance was needed, the fire department would send out its ambulance staffed by firefighters, which took one engine company out of service.

“Since Prime Saint Claire’s started, I only had to put our Fire Department ambulance into service two or three times,” Stahl said. “Previously we were doing it four or five times a week, which was really pushing the odds as far as risk goes. Having the additional ambulance is an outstanding concept.”

Stahl said one of the reasons the response time has been reduced is that Prime Saint Clare’s has a policy of 90 seconds out the door once the call is received by dispatch. In addition, all calls are routed to Harrison Police dispatch now, rather than a central dispatch in Monmouth County.

Saint Clare’s is an experienced provider of emergency life-saving services. It has been operating ambulances for the past 15 years in Morris County, where the healthcare system has hospitals in Dover and Denville.

Both Saint Michael’s and Saint Clare’s are owned by Prime Healthcare, an award-winning California-based national hospital network that owns 45 hospitals in 14 states.

Residents in a medical emergency should continue to dial 911. While Saint Michael’s is the closest hospital to Harrison, residents will still be able to choose which hospital they want to be taken to. Anyone requiring Level 1 trauma care will automatically be rushed to University Hospital in Newark.

“It’s a patient’s right to choose their hospital, but we want residents of Harrison, East Newark and Kearny to think of Saint Michael’s as their hospital,” said Robert Iannaccone, the CEO of the hospital. “We are not only the closest hospital, but we have the shortest emergency room wait times of any hospital in the area and the quality of our care is second to none.”