NEWARK, NJ – As part of its commitment to continually improve healthcare delivery to Newark and the surrounding community, Saint Michael’s Medical Center has upgraded two of its cardiac catheterization laboratories with the newest, state-of-the-art equipment.

Already recognized as a leading provider of cardiac care in the region, the new catheterization labs will allow Saint Michael’s to expand the scope of services offered to patients suffering from cardiac ailments, including a cutting-edge procedure known as transcatheter aortic valve replacement or TAVR.

“Our patients and our community will benefit tremendously by having these new cath labs, which offer technology and equipment that allows our doctors to continue providing state-of-the-art care,” said Dr. Claudia Komer, one of the chief medical officers at Saint Michael’s.

The new labs are part of an ongoing investment by Prime Healthcare Services, which purchased Saint Michael’s in 2016. Since then, the California-based healthcare network has invested millions in new equipment ranging from new systems for electronic health care records, new monitoring devices throughout the hospital and the latest cancer radiation therapy equipment.

“While Saint Michael’s was already on the technological forefront when it was sold to Prime Healthcare, the hospital continues to invest in the latest equipment to ensure our patients receive the highest quality healthcare in the region,” said Saint Michael’s CEO Robert Iannaccone.

A cardiac catheterization lab allows interventional cardiologists to perform tests and procedures to diagnose and treat cardiovascular disease. A thin, hollow tube called a catheter is inserted into a large blood vessel that leads to the heart. A catheterization lab has special imaging equipment used to see the arteries and check how well blood is flowing to and from the heart.

“The new cath labs mean patients will be able to receive advanced cardiac treatments without having to leave their hospital right here in Newark,” said Dr. Joaquim Correia, chief of cardiology. “We want to take care of our patients here, and now we can.”

One of the new labs at Saint Michael’s is a hybrid that combines the traditional diagnostic functions of a catheterization lab with the surgical functions of an operating room. The hybrid catheterization lab will allow Saint Michael’s to soon offer transcatheter aortic valve replacement (TAVR), a minimally invasive procedure that allows doctors to repair a poorly functioning heart valve, known as aortic stenosis.

“This new technology will make a big difference in outcomes. It’s going to make patients’ lives much easier and much better,” said Dr. Abbas Shehadeh, the director of interventional cardiology at Saint Michael’s, who will soon begin offering the TAVR procedure at the hospital.

Saint Michael’s has been recognized as high performing in the treatment of heart failure in the latest U.S. News and World Report ranking of hospitals.

For the last two years, Saint Michael has been named one of America’s 100 Best Hospitals for Cardiac Care. The hospital is ranked among the top 10 percent in the nation for cardiac surgery by Healthgrades and is a recipient of Healthgrade’s Cardiac Surgery Excellence Award and Cardiac Care Excellence Award. Healthgrades also named Saint Michael’s a Five Star Recipient for pacemaker procedures, treatment of heart failure and heart attack and coronary bypass surgery.

Saint Michael’s is also among the safest hospitals in the nation, earning an grade of A from the Leapfrog Group for two periods in a row, a Five-Star rating from the Centers for Medicare & Medicaid Services and a Patient Safety Excellence Award from Healthgrades. 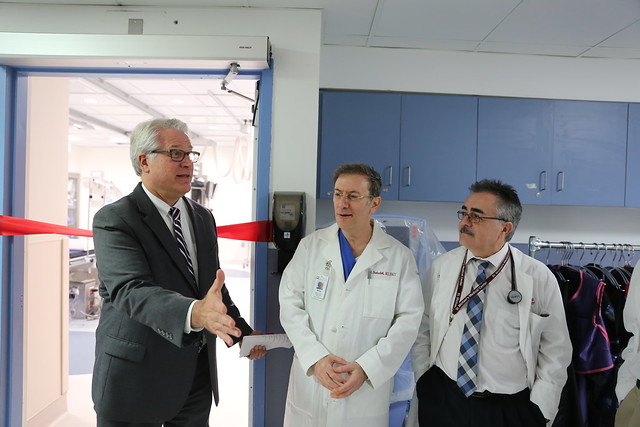