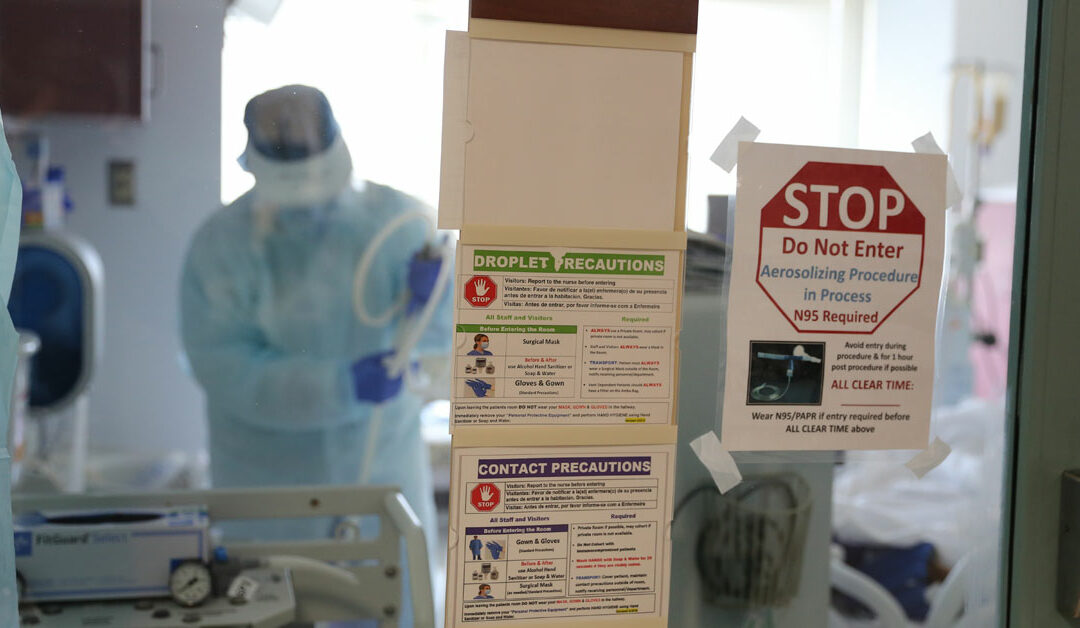 A Saint Michael’s Medical Center employee in the intensive care unit of a patient with COVID-19 on a respirator.

NEWARK, NJ — One of the most promising treatments for COVID-19 is being made available through an expanded access program at Prime Healthcare’s Saint Michael’s Medical Center in Newark.

Remdesivir, considered by the World Health Organization to be the most promising drugs to treat COVID-19, was developed by Gilead Sciences to treat Ebola. The antiviral drug is effective against two other coronaviruses that cause deadly respiratory diseases – SARS and MERS – and is in five large clinical trials for the treatment of COVID-19.

Saint Michael’s is one of only a handful of sites in the world to participate in the expanded access program, which will allow the hospital to administer remdesivir to critically ill patients who are on ventilators. The hospital has been a leader in clinical infectious disease research and has worked with Gilead since the pharmaceutical company was founded in 1987.

There is currently no treatment approved for COVID-19, a disease which has infected more than 1.2 million worldwide and resulted in nearly 70,000 deaths.

Saint Michael’s is located in the New York metropolitan area, which has become ground zero for COVID-19 infection in the United States. In the last week, Saint Michael’s has seen a spike in patients with the disease. Currently nearly every bed in the hospital is filled with patients who have tested positive for the virus. New Jersey has the second most cases in the United States, behind New York.

“The trial use of remdesivir is just one way Prime Healthcare hospitals are helping in the fight against this unprecedented pandemic,” said David Silverman, PharmD, vice president of pharmacy services for Prime Healthcare. “We are currently exploring options for expanded access programs of the drug.”

Prime Healthcare, a national health system with 45 hospitals in 14 states, purchased the 358-bed hospital in the heart of Newark’s business and university community in 2016.

“Prime Healthcare’s mission of saving hospitals to save lives has never been more important and we have been working tirelessly to provide resources to our patients and caregivers that will transform care, such as access to the most promising emerging treatments,” said Kavitha Bhatia, MD, MMM, Prime Healthcare’s Chief Medical Officer of Strategy.

James Fallon, the director of clinical research at Saint Michael’s, said remdesivir was previously available on a limited basis through a “compassionate use” program for individual patients who were too ill to participate in a clinical trial. About 1,000 people were participating in the compassionate use program.

Gilead Sciences Chairman and CEO Daniel O’Day wrote in an open letter published in March week that compassionate use typically works well when there are a limited number of requests for the drug.

“But the system cannot support and process the overwhelming number of applications we have seen with COVID-19,” O’Day wrote. “There is nothing typical about this crisis.”

With expanded access, hospitals or physicians can apply for emergency use of remdesivir for multiple severely ill patients at a time. “This approach will ultimately accelerate emergency access for more people,” O’Day wrote.

Dr. Jihad Slim, who heads the Department of Infectious Diseases at Saint Michael’s, has been involved in clinical research at the hospital since the late 1980s. Dr. Slim worked with Gilead on drug treatments for HIV/AIDS and played a leading role in the fight against HIV during the AIDS pandemic.

“Just as we played an important role in helping to find medications for AIDS, our Infectious Disease Department is once again ready to take on that role as we fight against COVID-19,” Dr. Slim said. “If remdesivir works the way we all hope it will, it will be a game changer.”