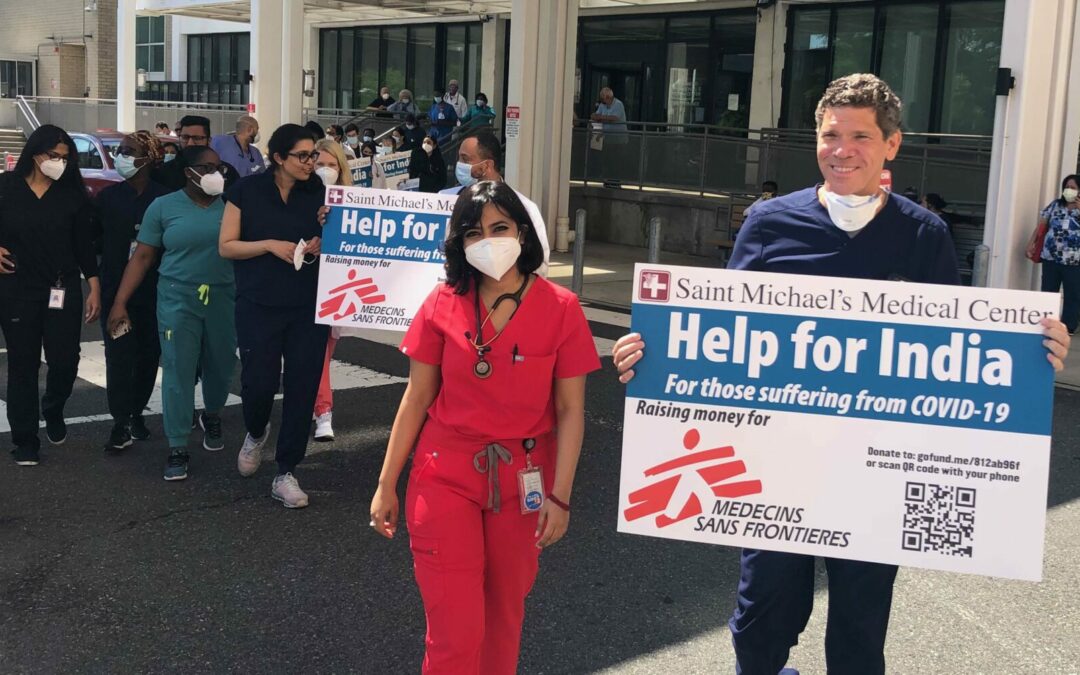 Dr. Manogjna Prasad arrived in America from her native India to get critical medical training just as the COVID-19 pandemic hit. But on a warm summer day in downtown Newark, she made sure to do her part to fight the virus back home.

“This cause is really important to me not only because I’m a frontline worker, but because I also lost a lot of family and friends to COVID,” said Dr. Prasad, a rising second-year resident at Saint Michael’s Medical Center in downtown Newark, as she led a march of 40 of her fellow residents and other staff to raise awareness and funds for the desperate battle against COVID in her homeland.

“I think this will bring awareness, and it will inspire people to donate,” she said. “India badly needs it.”

As the pandemic appears to be coming under increased control in the United States, COVID-19 is raging largely unabated in many parts of India, a South Asian nation of 1.4 billion people.

While the official death toll is closing in on 400,000 people, there are fears of a serious undercount because test facilities are rare in rural areas, where two-thirds of Indians live, and there is a dearth of hospitals.

Indian hospitals ran out of beds and life-saving oxygen during a disastrous second wave in April and May. People died outside hospitals, in parking lots, and at their homes.

Dr. Prasad’s family has been directly affected by these dire events.

“My father was very sick. He was fortunate enough to have oxygen, but a lot of my friends and family didn’t,” Dr. Prasad said. “They died because of a lack of resources.”

In response, Dr. Prasad was the driving force behind Tuesday’s march through downtown Newark. The residents made their way from the hospital to historic James Street, Washington Park, Broad Street, Central Avenue, and the Newark Museum of Art.

A GoFundMe page has been established for the effort. In five days, nearly $2,500 has been raised for the COVID relief campaign. All funds are going to Doctors Without Borders, an international humanitarian medical non-governmental organization, then on to India.

Dr. Theodore DaCosta, director of medical education at Saint Michael’s, noted that social activism is as much a part of the medical learning process as anything else.

“Part of the learning experience is not only to help your immediate community, but everyone else,” said Dr. DaCosta, a gastroenterology specialist. “This is an educational process, a bonding experience working together as a residency program to help those in need at home and abroad.”

Dr. Kalee Larsen, a rising second-year resident at Saint Michael’s, marched to support her colleague and appeal to the community.

“We want to support India, our friend Manu, and all of her family there,” Dr. Larsen said. “We also want to make sure that it’s not only us raising awareness, but also other people in Newark to encourage them to donate and improve conditions in India.”

“It’s getting hot, a lot of people are taking off their masks, cases are down. Things are going back to normal, but a lot of people still aren’t vaccinated,” said Dr. Atiyat, while walking in Newark, where only 34 percent of the population is fully vaccinated, according to state statistics. “A lot of people think it’s over and done with, but a second wave is definitely possible.”

As for Dr. Prasad, although her family is far away, she wants to do everything possible to help her family, and her country.

“I went to medical school not only to help people physically, but to help the wider community. It’s part of being a doctor. The burden falls on us now because we are the foot soldiers of frontline workers,” Dr. Prasad said. “The pandemic has helped denote a lot of inequities and inequalities. People need to start thinking outside of their comfort zone. I want people to be inspired to help, to donate, and to empathize.”