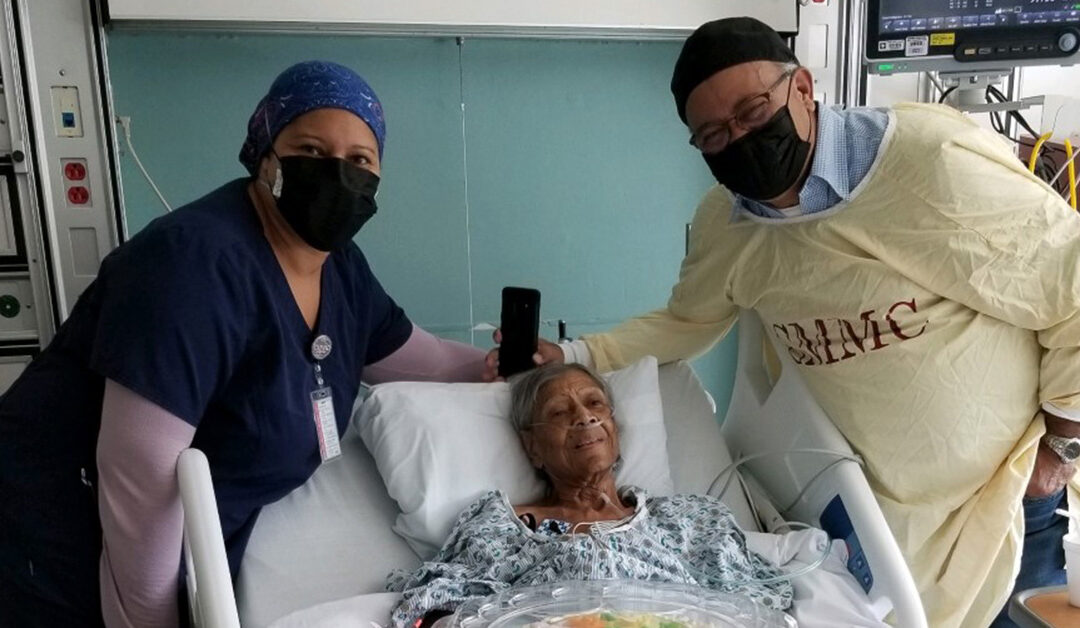 After Mariana Ferreira was admitted to Saint Michael’s Medical Center in Newark, her nurse noticed her face drooping, right sided arm and leg weakness and difficulty speaking – the telltale signs of a stroke.

Recently, Saint Michael’s Medical Center and Prime Healthcare’s other New Jersey hospitals joined forces and began working with a group of skilled interventional and vascular neurologists who provide the newest minimally invasive treatment for a stroke.

A CT angiogram was performed to determine whether she suffered a major blocked blood vessel in her brain.

Dr. Jeffrey Farkas, one of the most experienced neuro-interventionalists in the Northeast, saw the CT image on his cell phone using a new artificial intelligence-based technology recently acquired by the hospital and identified the blockage immediately.

Dr. Farkas recommended the patient be transported to Saint Michael’s state-of-the art catheterization laboratory, where he performed a mechanical thrombectomy, removing the clot and successfully restoring blood flow to the brain.

It was the first mechanical thrombectomy of the brain ever performed at Saint Michael’s.

Until recently, the only tool that doctors had for treating an ischemic stroke – one caused by a blockage to a brain blood vessel – was a clot-dissolving drug called tPA. But the drug must be administered within the first 4.5 hours of the onset of a stroke and it is less effective in patients with larger clots.

A stroke can quickly change a person’s life in a second from being a functional, active individual to dependent with limitations of function. If performed within the right timeframe and on the right patient, a mechanical thrombectomy can prevent further brain damage by quickly restoring blood to the brain and, in many cases, allowing a patient to return home, instead of ending up disabled in a nursing home.

“Thrombectomy is transforming stroke care, reversing brain damage in many patients,” Dr. Farkas said. “It is the most impactful medical advancement in the past 20 years. It’s the gold standard of care and it needs to become the standard practice of care for a stroke.”

Saint Michael’s CEO Dr. Alan Sickles, who worked with Dr. Farkas and his team at NYU Langone – Brooklyn, said bringing advanced stroke care to the Newark hospital was one of his top priorities.

“Newark and the surrounding community has a particularly high incidence of stroke for a variety of reasons,” Dr. Sickles said. “This new service provided by Saint Michael’s will save many lives and can improve the quality of life for people who suffer from strokes.”

The same program of stroke care is also available at St. Mary’s General Hospital in Passaic and Saint Clare’s Health’s two hospitals in Denville and Dover.

Ferreira, who is 90 and lives on her own in Newark’s North Ward, was brought to the hospital’s Emergency Room on October 14 by her son, Jose Lora, for unrelated reasons. She was an inpatient when she began experiencing trouble breathing. The next day, she began to show signs of suffering a stroke.

“When I saw her that day, her face was droopy,” Lora said. “The next day, her face went back to normal. She could raise her arm up and she was speaking clearly. It was a miracle. She is very lucky the stroke happened in the hospital.”

Ferreira, who is a Dominican immigrant who came to the United States in 1962, settled in Newark, where she worked in a factory as a seamstress. She raised three children on her own and, Lora said, is fiercely independent, refusing to move in with any of her children.

“She’s a hard-working woman,” said Lora, who lives only a few blocks away. “She bought her own house and never took help from the government. She is very proud that she did everything, including sending us to private school. She even worked in the church to raise money for our education.”

Lora said his mother, who previously suffered from a failing heart valve, has been a regular patient at Saint Michael’s all her life. Lora, and his wife, Dominga, said they are thankful for the hospital.

He noted that the hospital even celebrated his mother’s birthday when she turned 90 on October 17.

“We’re very happy with the care Saint Michael’s provided to my mother,” Lora said. “The hospital saved her life again. We just pray to God that she stays with us for a little bit longer.”